Talking with Snowball’s founders, Katrina Shaw and Jenny Dela Cruz, I felt an immediate connection to their passion and optimism. As an avid listener of entrepreneurial-focused podcasts, such as WIN/WIN: Women in Innovation, Second Life, and How I Built This, I knew I wanted to be a part of this women-led enterprise. My previous experiences working for larger businesses had left me feeling overlooked and disillusioned, and I was looking for something different.

In celebration of Women’s History Month, I want to reflect on three courageous women that have been featured in current media and have inspired me. In listening to Laura Teclemarium, Anne Olderog and Judge Ketanji Brown Jackson speak, I have found their insights to be refreshingly poignant, timely, and relevant. Although hailing from very different backgrounds in creativity, business, and judicial law respectively, I admire their immense amount of drive and dedication to their craft.

Laura Teclemariam, head of Product Innovation in Animation at Netflix, likens her career experience to a jungle gym as opposed to a ladder in Episode 79 of Women in Innovation podcast. Each new “exercise” gave her the ability to stretch and develop new skills. Working for companies such as Tapjoy and Microsoft, Laura carved out her career in the gaming industry. In a notoriously male-dominated environment, she didn’t see many women in senior leadership roles and even less so, women of color. As an African-American woman and without mentorship, Laura at times felt like an outsider.

Eventually, Laura found like-minded colleagues who reached out and offered to mentor and help guide her. She stressed the importance of a board of directors that “will fill you up with the right advice in order for you to move forward.” In her current role, Laura believes that authentic storytelling is needed to innovate within the media industry. Understanding “what’s missing” and “who we are forgetting” are key to designing authentic products for people who have frequently been left out and underserved.

Anne Olderog is featured on Episode 82 of Women in Innovation podcast. With a 25-year career in innovation consulting, Anne explains that reading novels has helped her achieve a deeper understanding of people and her team. “I think if books and novels and literature teach us something, it’s again the ability to live in someone else’s shoes rather than our own.” She elaborates that this orientation has enriched her ability to innovate, as it “allows us to lift ourselves out of our experience and puts ourselves in the shoes of consumers and understand how they see the world.” Using at once a personal and global lens has allowed Anne to make innovations that actually benefit people better.

During her confirmation hearing on March 23rd of this year, Judge Ketanji Brown Jackson emphasized that The Superior Court would best serve as a reflection of the American citizenry as a whole. She went on to say that if Americans see more diversity of race, gender, and background sitting on the Supreme court, it will bolster Americans’ confidence that judicial law is

being upheld. During the hearing, Senator Cory Booker stated passionately, “You went to become a public defender because you wanted to understand all aspects of the law. Who does that? Did you become a public defender for the money? No. Your family and you speak to service, service, service.” He continued, “You got here how every black woman in America who’s gotten anywhere has done, by being like Ginger Rogers said, ‘I did everything Fred Astaire did but backwards and in heels.” If confirmed, Judge Jackson will serve as the first African-American woman Justice to sit on the United States Supreme Court.

A great leader is somebody who can understand and speak to everyone. Or as Anne Olderog put it, “someone who’s comfortable in the boardroom and comfortable talking to everyone at all levels of the company.” The leadership at Snowball lives out this philosophy in how they interact with the staff. For an employee at a company such as myself, this feels like a breath of fresh air. Certified by the Women’s Business Enterprise National Council (WBENC) organization, Snowball is dedicated to helping other women and women-owned businesses thrive as well as inspire greatness in each other. These three courageous women inspire us to listen to one another more closely, to be of service to each other and our clients, and to lead with a grateful heart. 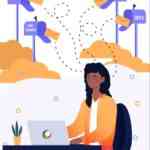 Delivering for America and the Postal Reform Act of 2022